The Smell of Chlorine

It’s a truth universally acknowledged that the sense of smell is more evocative than the other four put together, so it is no wonder that, as I get older, I am continually hooked back into my distant past. It is also universally acknowledged that as one gets older, one’s long term memory increases, as the short term one decreases. In fact it’s a standard senility test-“what did you have for lunch yesterday dear?.... Can’t remember? Never mind we’ve got some nice pictures here for you to match”  Well- can you remember what you had for lunch yesterday, or can’t you be bothered, in a busy life, to even think about it? Still, senile or not, I still have senior moments, and they seem to be coming along ever more frequently, like the times when the past clutches me by the nose and pulls me back….
And I am there, in the huge municipal swimming pool in East Ham: shouts and echoes, slimy tiles, weird wire baskets for your clothes, communal changing- oh the teenage blushes when your boobs were too small and your bottom too big! And what has brought me here? A whiff of chlorine when I cleaned the sink. It’s no use me peeling off my Marigolds and trying to chase away the memories with the smell of fresh coffee; I am there. Why today? It’s not as if cleaning the sink is that rare ( I may not do it every day, but I do do it) then I realise- it’s because I burnt the toast this morning, and the smell still lingers, and combines with the chlorine to make that unique smell which snares me and draws me into the past, bringing with it sounds and sights and the feeling of being a spotty, insignificant kid.
It wasn’t just the chlorine, eye stinging and almost visible- us east end kids used to pee in the water you know-, it was the toast- mountains of thin white sliced bread- (do I really remember that a loaf of it was eight pence three farthings when I used to be sent to buy it at the corner shop, in the days when there was a corner shop?) Big ladies with comfortable bingo wings made these mountains of toast and scraped cheap margarine and fish paste onto them.
-‘Ere, you got any ends missis?
(Ends were cheaper)
-There y’are love
-Put a bit a paste on it Missis
-Oh go on wiv yer then
On flush days when we didn’t have to rely on the good will of the ladies we would stuff ourselves with five or six dripping smelly slices. No slot machines full of choc bars and crisps, just bingo wings, white tiles, crumbs and chlorine. No health and safety inspectors to tell the ladies they couldn’t slap on the marge by hand and pass the greasy things straight into our chlorine scented hands.
Posted by Connie Jensen at Sunday, June 12, 2011 1 comment: 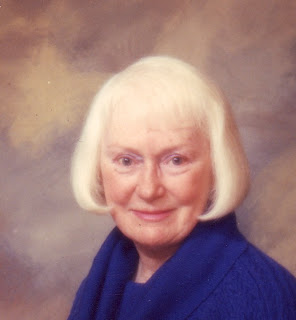 For those who are wondering about Kathleen Herbert, I have been in contact with her over the years since I left EHGS as a teacher, and have followed her career as a writer. Sadly, she suffered a severe stroke shortly after she had completed her fourth novel, and was unable for several years to cope with the complexities and stresses of getting it published. She has now handed this job to me, and I feel privileged to be involved in getting what is a very fine book to a wider public. To follow progress see my blog
Posted by Connie Jensen at Monday, September 27, 2010 No comments:

"Salve Magistra", we all solemnly intoned. Then she would solemnly shake hands with each of us- the Roman way of course, grasping forearms to check we did not have a dagger concealed in our toga!

Who remembers Miss Clifford? I can still see her today: grey hair in a bun worn low on the neck, full figure, sensible shoes- my defining picture of a lady! And indeed to us, nearly all from working class homes, she was a lady indeed, with her refined accent, slightly deep but soft voice, and her big house in Highgate. How do I know about her house in Highgate, and the other two Misses Clifford she shared it with? Truly, I had never eaten wafer thin cucumber sandwiches, or melon with ginger (on which I choked embarrassingly) until our A level Latin group was invited for tea.
She is my link to a now distant past, but she was much more than this- a bridge to the future- as they all were, these astonishing ladies- a whole generation of pre WW1 intellectuals, nearly all single, many having lost fiancés in the war.

For most of my generation of girls at EHGS, university was a distant goal, a doorway to an unknowable but glamorous world, and it was while I was in sixth form that I first remember being excited by ideas.

Miss Clifford was delighted when she learnt that I was to go to University College, London, as she was a UCL student before 1914. “A place of great freedom of thought” She was aware of Jeremy Bentham’s ideas and preserved body, just as I was, although in her time, lectures for men and for women were separate, and staggered by half an hour to prevent unseemly contact.

Later, when I taught at the school, I directed a modern version of a bawdy Roman play, The Rope, by Plautus. My main character was a con man, outrageously camp for those days- forty years ago. The young actress was a bit of a rogue, and as unreliable as the character she played, and chose to go on holiday a few days before the production. I had no choice but to take the part myself. I was well into my stride, milking the sexual innuendos for all I was worth,  when I peered out from under my purple wig, and to my horror saw Miss Clifford in the front row! What would she think of me? I would be deemed vulgar, and almost criminally irresponsible in her eyes.  I really wanted to be anywhere else but there.

After the show she came up, laughing and wiping her eyes, and pumped my hand vigorously “Oh my dear, you have captured the true spirit of Plautus”

Why do we try to protect our elders? Why do we underestimate them?

When Miss Clifford died, her sisters contacted me, and asked if I would like to have her academic gown and hood, as we both had a UCL BA. I was teaching at EHGS at the time and so Miss Clifford’s gown appeared once again at speech day. It is still one of my most treasured possessions, worn annually at my last school’s Medieval Days celebrations.

My older daughter wore the gown when she graduated as a teacher from London Metropolitan University and one day, hood and gown will pass to my younger daughter, who took her degree at UCL. Another bridge to the future.

You biffed me with your bag!

There were lots of shrieks and hugs, and well, maybe the odd tear. The years just seemed to drop away; we saw ourselves mirrored in the eyes of our contemporaries, and we were young again. We are like Russian dolls- all the people we have ever been are still there inside us, and a gathering such as we have just enjoyed twists a few of them open and reveals the earlier versions.

I walked round the old building, stood in the middle of a domestic science room, and watched the cookers and benches dissolve to reveal my old art room, and I was back then, struggling with an exercise which taught me so much about seeing that I remember it nearly every day of my life. Miss Catherwood set up a white still life box, and in it put a white jug of white daisies. We had to paint it on white paper with coloured paints. Until then, I had not realised how many colours there are in shadows, nor how form and colour are defined by what is next to them. In fact everything affects everything else (only connect)- as much a lesson for life as for art. This was typical of what we learned: all our lessons were related to life. Perhaps this was why we all felt it was a very special school. I had to think when a present student asked me what made it so special, and told her that it was the staff: they had a passion for learning and for life and did everything they could to pass it all on to us. "grab every bit of education you can", said Mrs Redhead to me. I have repeated that many times to my own children and to my students, and I guess we could all say something similar.

As we explored the old building the memories came flooding back:
"This is where it was!"
"What?"
"You know-You biffed me...."
"You what?", said I, after Leslie and Grass got over their giggles.

Apparently, Leslie had been legging it along the corridor as usual, late for a lesson, as usual, when she encountered Mrs Cannell- who appeared to us then, at least ninety and improbably tiny, peering malevolently at the world through the smallest, thickest, roundest glasses we had ever seen.

"You positively biffed me with your bag, girl", -came the loud RP squawk, which I would probably have desribed then as a Jolly Hocky Sticks voice.

For Leslie and Grass it is a catch-phrase, which instantly transports them back in time and place.
Posted by Connie Jensen at Sunday, June 27, 2010 No comments: 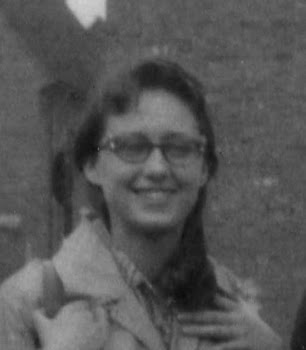 Connie Jensen
Cumbria, United Kingdom
When I retired about seven years ago, I had many ambitions, and was excited at the prospect of a second life. I wanted to write, paint, travel, and return to the craft I once tried to make a living at- jewellery. Now, I am a member of a cooperative of artists / crafts people which rents a gallery in our local market town. There I exhibit and sell paintings jewellery and books. Above all, I wanted to get in better touch with friends and family- as this is what matters most to us humans. Once the shackles of working life start to fall away, (and that's not instant or easy) the personal life becomes more important than ambition or competition. (Does anyone remember the end of Dr Zhivago, the film that is, these days?) This means that I devote my time now to all of the above. As someone said, work is a four letter word! However, I don't think I'd enjoy my retirement as much if I hadn't given my all for so many years to a largely enjoyable, and I hope useful, career as a teacher.